Java floods the senses. It is heat and spice and history. It is trade and religion and turbulence. Deep cultural roots, firmly staked belief systems, and long years of colonial and civil strife envelope the land in a patch-work cloud of contradictions.

But every April 21st, on the day of her birth, one woman rises above this cloud. A self-educated pioneer of feminism, she is a nationally recognized hero. Her name was Raden Adjeng Kartini, and once a year the nation of Indonesia celebrates her day: Kartini Day. 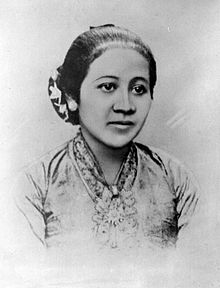 Portrait of Raden Ajeng Kartini (from the Tropenmuseum collection)

Kartini, the daughter of the Regent of Japara, was born in 1879. She attended school until the age of 12 – almost unheard of for girls at the time. She was then restricted, according to tradition, to her home.

2 thoughts on “A Feminist is Born: Raden Adjeng Kartini”